Monday February 25, our VFW had it's monthly family dinner and I had the priviledge of presenting a Quilt of Valor to a Korean War Vet. This was especially good as Chris has never had anyone say thank-you to him and has also just been diagnosed with cancer and is almost 90 years old. 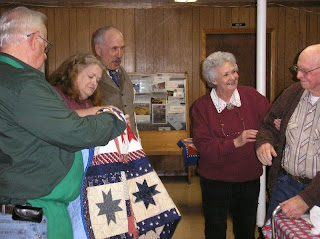 Our President of the VFW Post, Ray, helped to present the quilt and Chris was given a resounding round of applause and many thank-yous. I was accused of pinching him as I wrapped him in his quilt and the tears began to fall, that is why his head is bowed and I swear I did not pinch him and my own tears were right there with his.

submitted by J. Marie
Posted by Alycia~Quiltygirl at 9:03 AM No comments:

There is a great little sewing group up in Boulder - and they are quite prolific! They send all their Quilts of Valor overseas, and I am so proud of them. Terry and Beth are the ringleaders!!

Here are some photos of the recent quilts they have finished and requested destinations for:

This one is still a top and heading out to a longarmer: 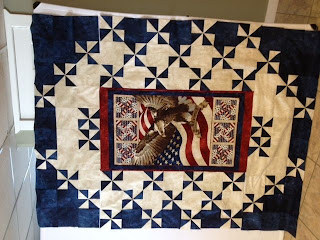 This one was quilted by Nita Vono. 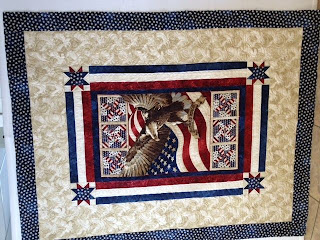 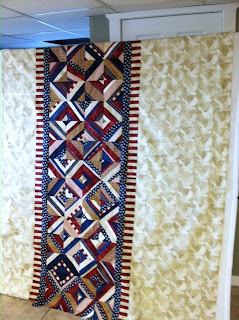 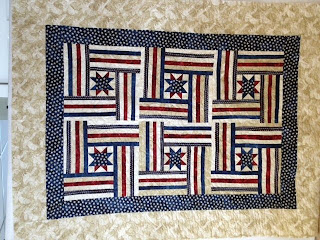 And here are some detail shots of the quilting: 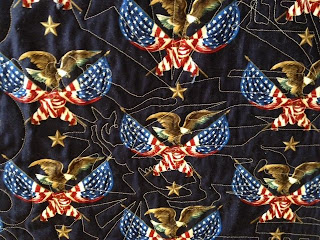 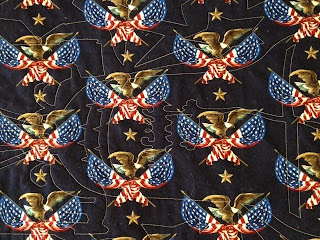 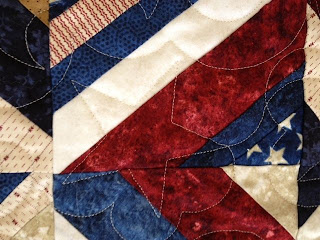 Thank you all so  much for sharing your great Quilts of Valor.

Posted by Alycia~Quiltygirl at 8:19 AM 2 comments:

FCCLA in Texas is making QOV's


We are aspermont FCCLA chapter/ family& consumer science dept at Aspermont schools in a small rural big country community of Texas- we have about 50 students in our group ranging from 6th to 12th grades.

We joined the QOVF in the fall because we wanted to enter into a service project that will honor others. 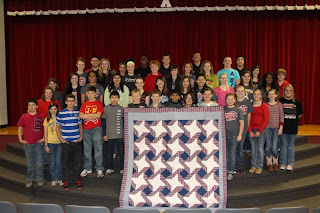 This is the first quilt we have finished, and it was sent to Afghanistan. We have about 10 more in the works.

Thanks for this avenue to serve. 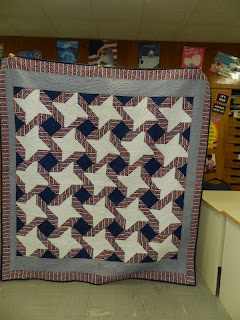 THANK YOU Mary and your class!!!!.

Posted by Alycia~Quiltygirl at 6:00 AM 3 comments:


Sievers School of Fiber Arts, the location of the QOV event, is located on Washington Island, WI, an island at the tip of Door County, accessible by ferry boat. Dick Purinton, the writer of the blog, is the CEO of the Washington Island Ferry Line, and a regular blogger. His wife, Mary Jo, was a Rookie on Saturday.

You will love checking out Dick's Blog Post about the Washington Island Event
Posted by Alycia~Quiltygirl at 6:30 AM No comments:

Let’s Roll
Inspired by Todd Beamer’s final words on September 11, Flight 93, "Are you guys ready? Okay, let’s roll!” the words have become a rallying cause for both Patriots serving down-range and those that support them world-wide.

On National Quilting Day, Captain Baker was honored during a presentation of his Quilt of Valor, by the MSP Quilting Angels, Germantown, MD. 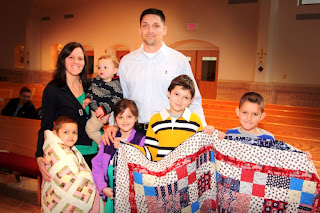 CPT Baker recalled his time in Kuwait at Camp 93, located just south of the Iraq/Kuwait border – whose motto was “Let’s Roll”. “I was awestruck”, CPT Baker said after the presentation, “looking over the many pieces that make up my Quilt of Valor and I saw those words that mean so much to me and the men I served with at Camp 93– “Let’s Roll”. I am truly touched by this recognition of my service and deeply touched”.

Of all of the things I LOVE the most about Quilts of Valor.... seeing pictures of the presentations has to be the best!!

This Quilt was presented to L.H.   L served in the Army, Afghanistan and Iraq.


My husband received his quilt when you said it was suppose to arrive. I tried to take pictures and they turned out okay but my husband doesn't like pictures.

The first picture is when he first opened it. He was very excited and it shows in the picture (he loves this one). 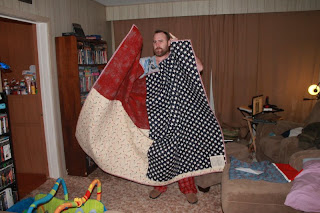 The second one is the one I tried to get a proper picture. 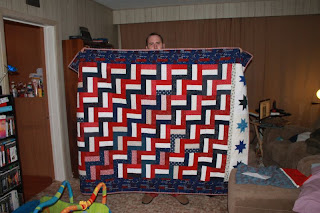 Thanks C - for capturing the happiness this quilt brought - it warms our hearts!

This quilt is one of the Moda Star Quilt Kits that Lincoln QOV made for the National 4-H Conference.
The kit was pieced by Eileen, 4-H Extension Agent, York, NE and was quilted by Judi T, from Omaha, NE.

So many loving hands made a special quilt to help heal and comfort L.H. and his family.

No Time to Sew?


Preface: This is written by Linda K - our Alaska Coordinator. I thought it was such a great idea I asked her to write up what she was doing. Thanks Linda!!!


Earlier this year someone mentioned they'd like to participate in the Quilts of Valor mission, but just didn't have time to do that much sewing. Another mentioned that if a person made only one block a day for the year, they could complete 18 quilts! Wow! So little time; such great rewards.  I decided to give it a try. Let's see how much I can accomplish in a small amount of time.


In Mid-January I began making just one block a day. First I clicked through 12" block patterns on Marcia Hohn's website, Quilter's Cache, www.quilterscache.com by going to her Quilt Blocks Galore link. I printed out a few patterns and began making just one block per day using "leftovers" that were taking up space on my cutting table. I decided to pull out two pieces from my stash to be "constants" in all the blocks; a white TOT would make a good background, I thought, and a large piece of a red TOT would tie the blocks together. Then I began making blocks. 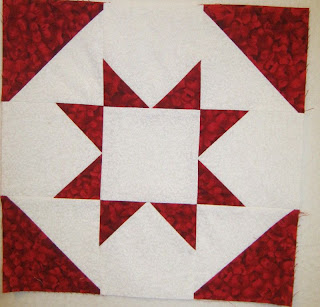 A Dandy (which I did with two variations)
http://www.quilterscache.com/A/ADandyBlock.html 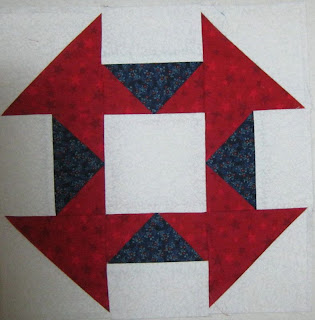 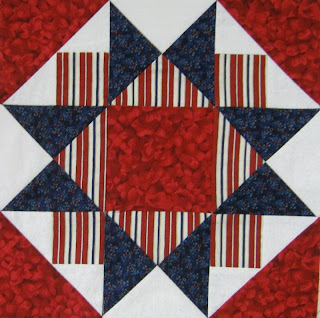 A few days later I had a number of blocks made so I began playing with layouts. I decided that I wanted to try one that formed a secondary design when put together with sashing, so then went in search of other blocks that would help make that happen. All blocks need to be 9-patches and have the red TOT in the corner triangles. I looked through a couple of books that have been sitting on my shelf collecting dust. What inspiration I found there and added a few blocks from the books to my other daily blocks. 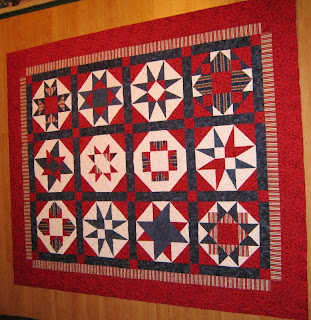 Try this for yourself. Allow yourself 15 or 20 minutes a day to enjoy your "textile addiction".  I think I'll do this again, but next time will decide on one or two blocks and choose a set of fabrics for a more planned quilt. This time I will cut all the pieces before starting to sew, then will be able to drop into my sewing chair for a quick few minutes of sewing at a time each day. Twelve to twenty blocks are all it takes to make a fine Quilt of Valor. That means in less than a month a quilt for one more of our warriors can be finished.

Posted by Alycia~Quiltygirl at 7:00 AM 5 comments:

Want to get involved?

Here is your chance!!!

Welcome to the many new members of the QOVF community and hello again to those who have been on this journey for a while.  We each have a role in this important endeavor to honor, welcome and embrace all those men and women who have been touched by war with healing Quilts of Valor.

Numbers
The total  number of QOV awarded since November 2003 is 82,813! This means 2,813 so far this year.  You have done a great job of remembering to report QOV Awarded and we are growing in numbers of participants at about 20 new registrants per week.

How can you help?
We always welcome quilters, piecers, and others who can organize and inspire us.

Right now we have several urgent needs for volunteers to fill important positions:

*A longarm volunteer who is willing to serve as Longarm/Topper Coordinator.  Judie Yates has done a marvelous job of filling this important job for the past two and one half years, but she is ready to move on to something else.

*A person to edit a short monthly newsletter.

Here is the link that will take you to the list of vacancies, and lead you to the job descriptions:

Thank you for putting service above self.  Your efforts make a difference.


Posted by Alycia~Quiltygirl at 4:31 PM No comments:

On February 10, we presented quilts to 17 members of the 270th ATCS of the Oregon Air National Guard at Kingsley Field in Klamath Falls, Oregon, who had been previously deployed to Iraq, Afghanistan, Pakistan and Qatar.

The recipients posed for a group picture afterwards: 16 men and one woman.

You may ask why did we give that young man the black and white floral quilt? Why didn't we give it to the young woman who is holding the green and brown pieced quilt?

Well, because they chose the quilts themselves! We laid all 39 quilts out on tables so they could see each one and gave them time to make a selection.

The lesson here was that our stereotypes can be highly misguided and when we have the opportunity, we should allow the recipients to tell us what they like.

Our presentation was a huge success, in the words of the logistics coordinator, shown with the quilt makers, "That was absolutely fantastic!!!!!!!!!!!!!!!!!! I am honored that your organization takes so much pride in the United States Military personnel!!!" 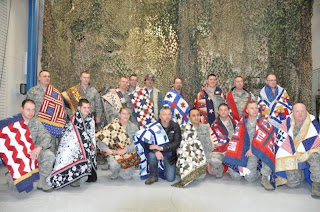 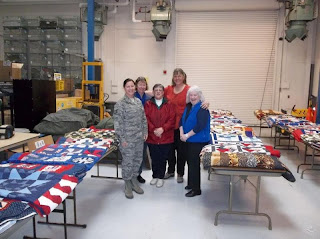 On the Pentagon News


Lenny Truitt and I ( Laurel B.) recently found ourselves on the Pentagon News regarding the Quilts of Valor Foundation.  As region 9 coordinators, we were contacted by the Port Mortuary News and Documentary Department asking if we would consider making a video presentation.  Their request coincided with our bi-monthly QOVF sew a block day held at our local quilt shop and we thought it would be the perfect time.


QOVF founder Catherine Roberts began the practice of awarding a QOV to Port Mortuary workers upon completion of their mortuary rotation and Lenny and I have continued our support of that endeavor.  Most but not all Port Mortuary workers have been deployed and have stood in harms way.  But each has earned their QOV by providing the final honor for their fellow service members.  Their care and devotion in this final act is demanding , exacting, and as stressful as being in harms way.  We have seen first hand the reactions of workers as they are notified of the pending arrival of the fallen an we have also heard from them how much the QOV means. It is our privilege to be able to honor each and every member of the port Mortuary.


Here are the links to the video.  One is the mortuary affairs news and the other is the Pentagon Channel.


Posted by Alycia~Quiltygirl at 7:00 AM 2 comments:

Oh My Gosh!!! I had such fun reading this blog.... I wanted to share it with you!
I wish I could copy and paste their posts - but I will just have to send you that way instead:

The first picture is pillowcases that she has made - check out the embroidery on them. Isn't that cool? 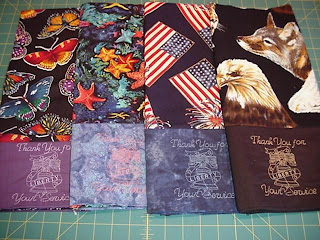 The picture of the wall hanging  ( below) is the one that went to a stress control officer
to help decorate her office in Qatar.  It has their unit designation vertically on the side borders.

I've made that wall hanging for different groups and people several times.
The eagle is from Embroidery Library.  I split it for 3 hoopings for my
machine. Takes several hours to sew out. 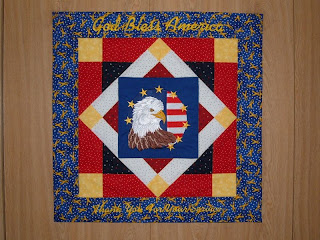 Here are some close ups of another quilt that Karol made!  Thank you Karol for sharing these with us!! 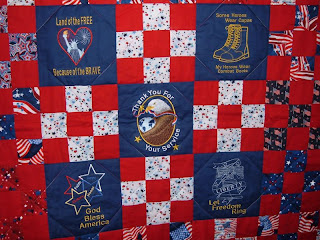 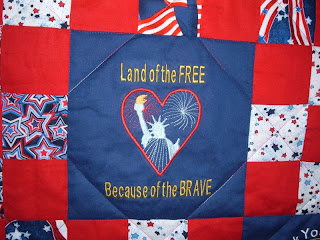 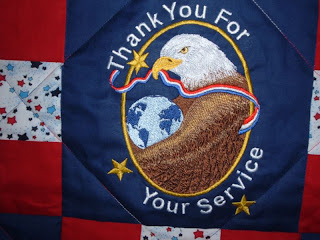 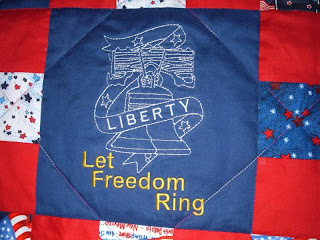 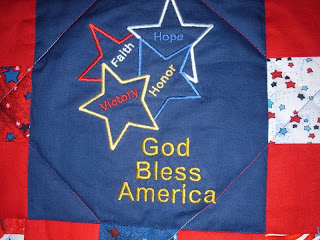 Posted by Alycia~Quiltygirl at 2:32 PM 3 comments: