Challenge Quilt and the Quilters


My sister, Janet G, and I (Sue)attend a quilting retreat with friends each year in  NY. Each year someone's name is picked to create a challenge for the group to work on.  Janet's name was picked.  She is a new quilter and asked me to work on it with her.  We decided it would be a quilt made for a wounded soldier.  We made this decision because Janet's son-in-law was injured in Afghanistan and received several quilts.  He was moved by receiving the quilts.

I found the pattern in my stash of patterns.  It was in a calendar.  The pattern is called Hearts United by Nancy Bordeaux.  We decided this would be a great pattern for making Quilts of Valor quilts.  There were 26 of us at the retreat.  We asked each person to bring some red, white and blue fabric that was patriotic.  We showed each person how to make a block and the results were 26 beautiful heart blocks.  Janet and I used all the blocks to put together 2 quilts. (The two extra quilts were used for the labels on the back of each quilt.)  Some of the sashing, border, and backing fabrics were donated by Bits and Pieces quilt shop in Pelham, NH.  Janet and I donated some of the sashing, border and backing fabrics as well.  Janet and I completed the tops and I machine quilted them. 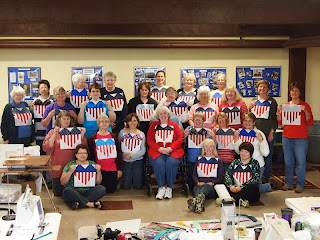 We hope the soldiers who receive these quilts feel the comfort we have sewn into each one. 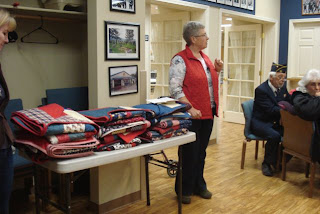 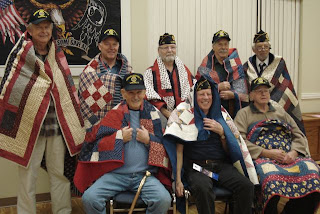 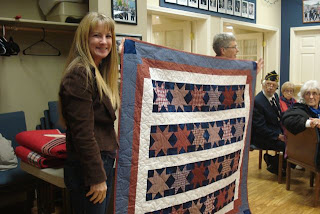 Here are some pictures from the presentation in Cascade Idaho.  Can't help bu LOVE the smiles!!
Posted by Alycia~Quiltygirl at 6:30 AM No comments:

How many of you are planning to head to HMQS is Salt Lake City this spring?

Challenges  ( you need to scroll down to the bottom)

I have already received my fabrics and am starting to work on my Challenge Quilt!! All of these quilts will go to help Utah Coordinator Diane J to fulfill her requestsfor 218 Quilts of Valor for Summer/Fall 2013! 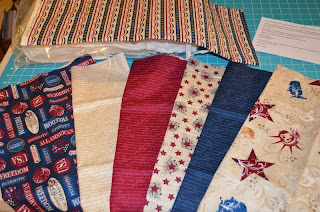 If you are planning on attending you are more than welcome to bring a Quilt of Valor for Diane!!
Posted by Alycia~Quiltygirl at 6:30 AM 3 comments:

The Veterans' Day Quilt of Valor Presentation Ceremony was another highlight of our lives. We had several ladies (who are members of the Central Idaho Quilters Guild) attend for their very first time. They're hooked!! We were able to present 20 of the 25 quilts we had ready for the occasion. Thanks to Arlene Thomas for our great pictures. The event was held in Kamiah, Idaho, with approx. 100 people in attendance.

We shared laughter, tears, and pride as we said the Pledge of Allegiance, sang the National Anthem and then "muddled" our way through the songs that represent each branch of the service. We presented quilts to veterans and soldiers from World War II to Afghanistan and Iraq. What a day. It was again a day of so many emotions. I love my job as coordinator. And I appreciate so much the work that all our ladies do to get these quilts finished and ready for presentation. A special thanks to Candy Throop, Pam Bruner, and the many others who helped with quilts, decorating, setting up and tearing down, and for all the delicious cookies!! So many cookies!!!

Our next presentation will be Memorial Day, 2013. Get to work ladies!! 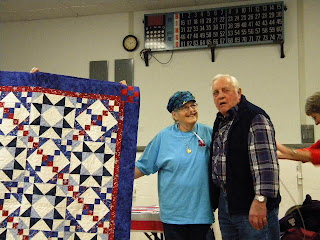 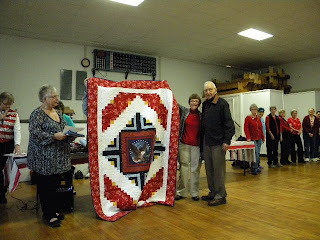 For more pictures go to ClearwaterProgress.com, click on "order Prints Here" on the left side bar. Then click on "Recently added" on the right side bar, then click on Quilts of Valor. Thanks to Gina Jorgensen for her fine photography and for putting the group photo on the front page of the Progress. You are so appreciated.
Posted by Alycia~Quiltygirl at 7:30 AM No comments:

We have a wonderful group in Boulder Colorado making Quilts of Valor. In 2012 they sent at least 12 Quilts overseas to Afghanistan. I so appreciate them!!!

Here are two of the Quilts that Becky and her group have just finished! 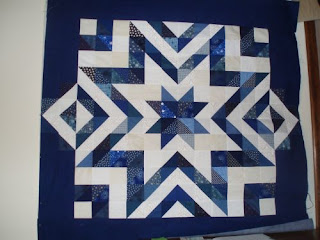 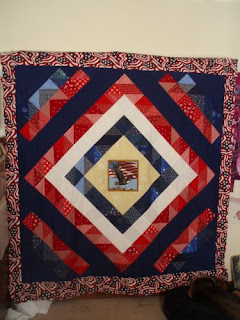 Beautiful quilts Ladies!!!
Posted by Alycia~Quiltygirl at 7:00 AM 6 comments:


Just wanted to touch base with you to let you know we are still out here and active.

The enclosed photo is of a presentation we made to the 93rd Bomb Group, at their last reunion.( Oct 18, 2012). The gentleman on the left is Fernley "Bud" S. Bud was the youngest Bomber pilot of WWII. He joined at age 17 and by the time here reached 18 he had flown 18 Combat Missions.

The 93rd Bomb Group was the most decorated Group in combat, including two Medals of Honor. It later was re-designated as the 93rd Bomb Wing, of which I had the honor of being a part of.

Just for your info, The gentleman on the right is John M. who is the president of the Assoc and the lady is my wife Charla, holding the presentation case.. 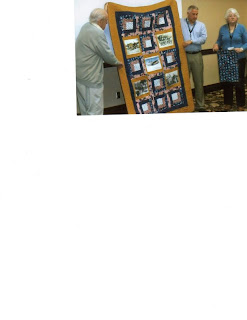 Posted by Alycia~Quiltygirl at 7:00 AM No comments:

I wanted to take a moment to thank you for the quilt my husband just received. He felt so very honored and respected to get such a beautiful quilt. I cannot thank you enough for not only this foundation, but also every single person who donates their time/energy/money to this cause. My husband has a Traumatic Brain Injury and anything that honors his sacrifices makes such a big impact. I am his caregiver and I see the day in and day out events that cause emotional trauma for him. It was absolutely refreshing to see him light up with joy while getting the quilt. Thank you again to all who contribute to make these quilts. We are so blessed by this gift. Thank you.

Julie
Posted by Alycia~Quiltygirl at 6:00 AM No comments:

I put out a request for Floating Star Blocks in Sept. The goal was to get as many varied size blocks as I could by time of the MQX West Show in Portland, OR. I was able to make 7 quilts from the blocks and an 8th one from some Moda Star blocks. I promised all blocks would be put into quilts for overseas. 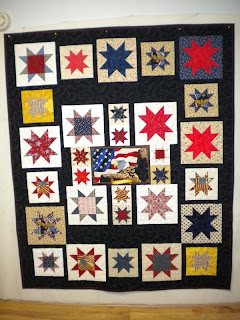 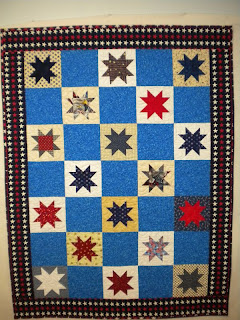 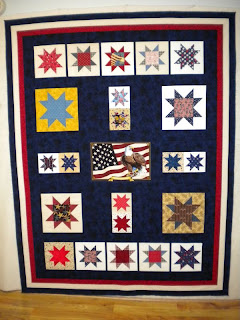 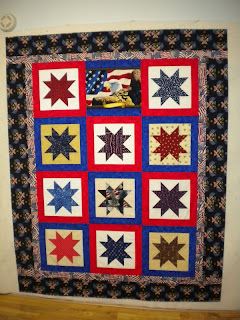 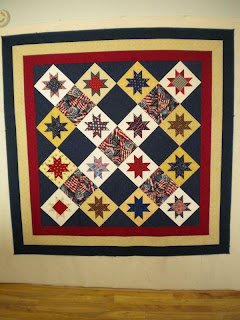 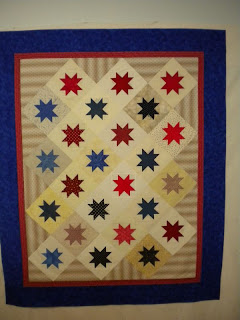 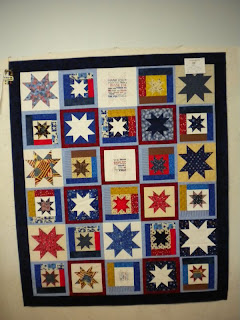 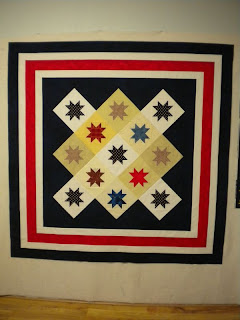 I made December the month to get these quilts made and to LA's. They are pieced and I have 2 back, finished, laundered, in cases and waiting for the rest of them. I expect them soon. A Big thank you to all the LA's who stepped up to see them through to the end. Please enjoy the quilt show. Can you find your blocks? There are no patterns - except in my head.
--
Sharon Ledbetter
Idaho Regional CoordinatorQuilts of Valor Foundation
Posted by Alycia~Quiltygirl at 6:00 AM 5 comments:

I would like to share a couple of stories of Quilt of Valor presentations that occured in Salina, KS.

In 1982, Derrick crossed the stage at Ell-Saline High School. This was 2 years before me, and I remember him well.  He was such a likable guy.  He always made you laugh and was just one of those you would never forget going to school with.

Forward 30 years, my sister calls, and says. " Tina they are having a family reunion for Derrick." And I asked, "You want me to come?  I’d be glad to see him again." But then she says the most shocking thing to me.

"No, Tina, you don’t understand.  He hasn’t been home in 17 years,  and I would like you to present him with a Quilt of Valor."

I think I dropped my phone.  I was in shock.  Derrick was in the Military?  Not only was he in the Military, he had over 400 jumps under his belt and a Bronze star.  In 2003 he was in Enduring Freedom.  My mind was just a jumble of all kinds of thoughts.  First, I could not believe that this mild mannered young man had joined the Military and he retired Military. 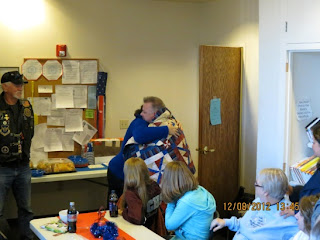 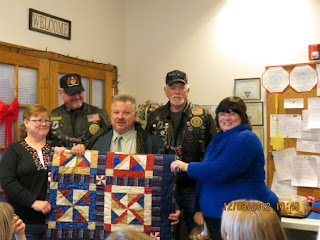 The highlight of this presentation is when I told Derrick that he had to use his new woobie, not hang it on a wall or put it away.  He then explained to everyone what a woobie was in Military terms.  Although we all think of a term for a well loved blanket, it means something totally different to Military veterans and Service Members.  Derrick said not to worry…It was the best woobie he ever had and it would be well used.  Through the tears of his story of the woobie, we still had to smile.

The second presentation was that evening at an annual Christmas dinner party.  One of our sponsors has many veterans and a few service members working for them. We try to present one Quilt of Valor a year to an employee of theirs. Well, unbeknownst to me, Bill was the recipient of this one.

I have known Bill since the 1990’s and never knew he served.  He had never talked about it.  He has recently gone through some very hard times health wise and to present him was such an honor.

At the party Santa gives out gifts to the kids. Santa has me standing me up there with him,  and calls Bill up.  The look on his face…Priceless. 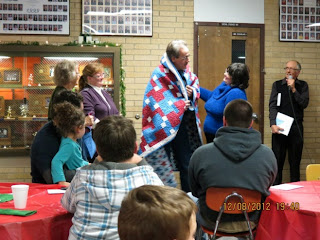 These are two of the most recent presentations that we wanted to share with you. They have been so touching to us.


Posted by Alycia~Quiltygirl at 6:00 AM 3 comments:

This quilt was submitted by Sharon in Idaho. It was quilted by Tami D of Washington. There is not a lot other that WOW - that needs to be said! 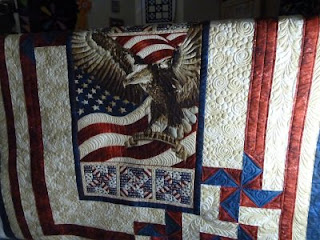 Posted by Alycia~Quiltygirl at 6:00 AM 4 comments: